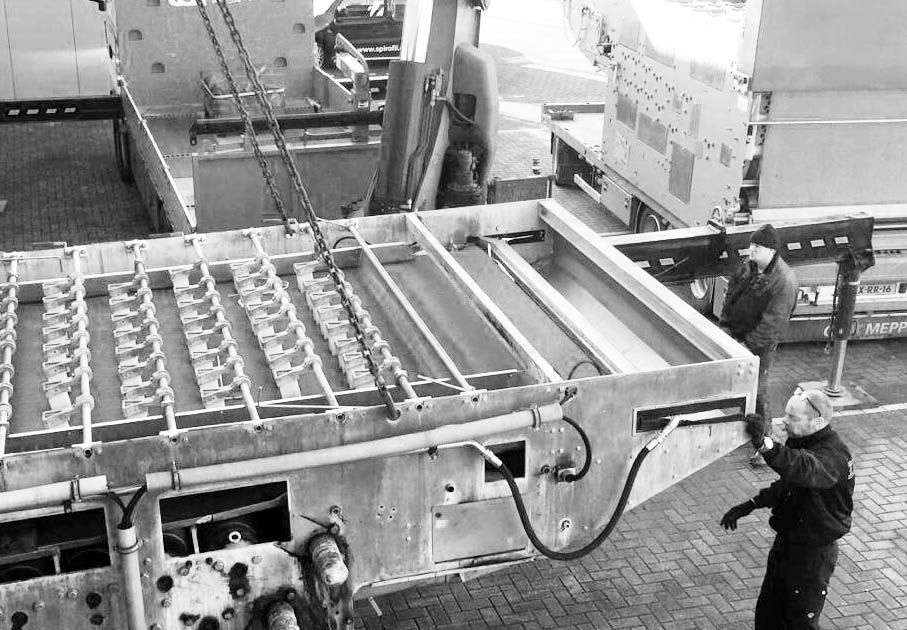 Example of an belt filter press

A sieve belt press is a machine that compresses a suspension between filter cloth (filter belts), whereby pressure can be built up with the aid of rollers, which results in separation of a solid and a liquid. A belt filter press is part of a larger installation. In such an installation you will find all sorts of peripheral equipment, such as a polymer installation, pumps (sludge supply, belt rinse water, filtrate discharge) and a cake discharge installation.

Applications for filter belt presses can be found in the dewatering of sludge and slurry in waste water treatment, soil cleaning, mining industry, chemical industry, agriculture and horticulture, etc. In addition, belt presses are also used in fruit processing (preparation of fruit juices and wine making). In contrast to a (chamber) filter press, a sieve belt press is in continuous operation.

Sludge removal is an important operational cost item for water treatment. The lower the dry matter content of sludge, the more is paid for the removal of water. The dry matter content in organic waste water sludge rises to around 25%; 60 percent is certainly possible for some inorganic sludges.

Advantages of a belt filter press

A belt filter press separates a solid and a liquid from a suspension (a mixture of a liquid with a powdery substance). This separation process takes place under pressure with the help of filter belts (filter cloth) 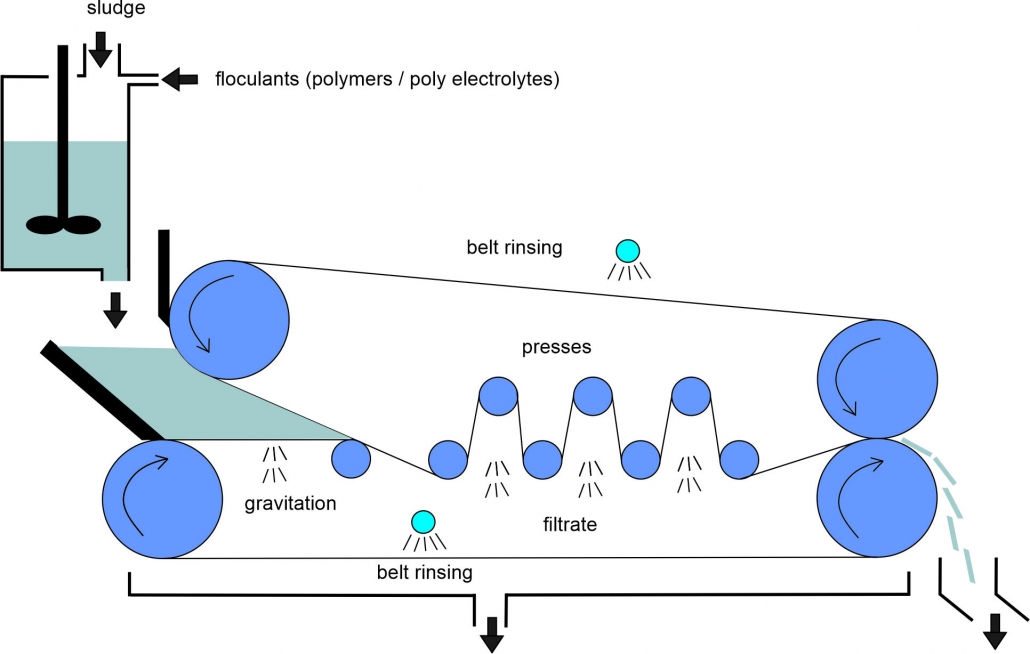 In many applications, floculants (polymers / poly electrolytes) are used to cause smaller suspended particles to clump together into larger particles that are also referred to as flakes. These flakes are easier to separate from the water and are better captured between the relatively coarse filter bands (filter cloth) in a press. Before dewatering, the suspension (sludge) is “mixed” with the flocculant, so that sludge flakes are formed, which can be easily separated from the water fraction and can be pressed between the filter belts. Floculant is added using a dosing system that is part of the installation.

The flocked suspension is poured onto the horizontal filter (or sieve) belt. Adjustable guide plates on both sides of the belt ensure that the sludge cannot slip off the belt. This is where the first separation of the sludge and (free) water takes place. So-called ‘Chicanes’ distribute the suspension over the sieve belt, mix it and dress it, creating a well-pressed product.

The water released from the sludge, the so-called filtrate, passes through the filter belt under the influence of gravity and is collected in a container. This filtrate contains a small amount of solid. This can lead to a relatively high return.

The sludge flow then comes between two sieve belts and is compressed under increasing pressure. The actual pressing process then takes place. The sieve belts (with the sludge between them) are passed through a number of rollers, whereby the sludge is constantly being drained. Two scrapers remove the remaining sludge cake from the filter belt. Spray nozzles clean both belts.

A belt filter press dehydrates until a solid mass remains. A well-designed installation achieves high dry matter contents with a low polymer and energy consumption. The belt speed is relatively low. There is also a speed difference between the two filter belts, as a result of which, in addition to pressure, shear forces also help with dewatering; a higher dry matter content is hereby obtained.

Example of a (pre)dewatering table or belt thickener

A belt filter press is often preceded by a (pre) dewatering table, thickening table or belt thickener. This is also referred to as a gravity drying step, whereby a large amount of free water can be separated from the sludge water mixture. A dewatering table increases the separation efficiency of the filtration at a low cost. On biological sludge, separation yields of more than 99 percent and dry matter concentrations above 10 percent are certainly possible.

Advantages of a dewatering table

After this step, the sludge is mixed with a flocculant or floculant, resulting in a conditioned sludge. A dewatering table is a simplified version of a belt filter press.

A dewatering table or belt thickener is used as the first dewatering step, wherein solid and a liquid are separated from a suspension. With the help of filter belts this separation process takes place on the basis of gravity (gravity drying step). A suspension is transported on the filter belt with so-called chicanes guiding and turning over the sludge. The liquid falls through the filter belt and the more solid particles are scraped and collected at the end of the belt.

After this step, the sludge is mixed with a flocculant, resulting in a conditioned sludge. A dewatering table is a simplified version of a belt filter press.

(Sludge)dewatering with a chamber filter press

From a technical point of view, a chamber filter press or filter press is a relatively simple and very flexible press installation that is suitable for many applications, particularly in the food industry and mining. The medium to be filtered is pressed batchwise through vertically hanging plates with filter chambers. There is a filter cloth on each plate. This type of press achieves the highest separation efficiency of all mechanical separation techniques, because the product can be pressed directly into sealed ” chambers ”. A chamber filter press achieves a solid content in the filter cake of 30 to about 70 percent depending on the suspension and dewatering properties.

Advantages of a chamber filter press:

Separation with plates with filter chambers

With a chamber filter press, the sludge is pumped into different plates which are provided on both sides with a permeable woven filter medium (fabric or filter cloth). The design of the plate in combination with the filter cloth results in so-called filter chambers. The filter cloths retain solid particles and the liquid can drain through the mesh openings, creating a filter cake. Filling the chambers becomes more and more difficult because they fill with solid, resulting in pressure. The feed pump is then also switched off at a preset maximum pressure. This completes the filling phase. The solid cakes in each plate must then be removed from the filter chambers. A subsequent cycle can then be started. Emptying the filter chambers and replacing the plates is a secondary process that, depending on the application, can be automated whereby the separation process can therefore be ” continuous ”. 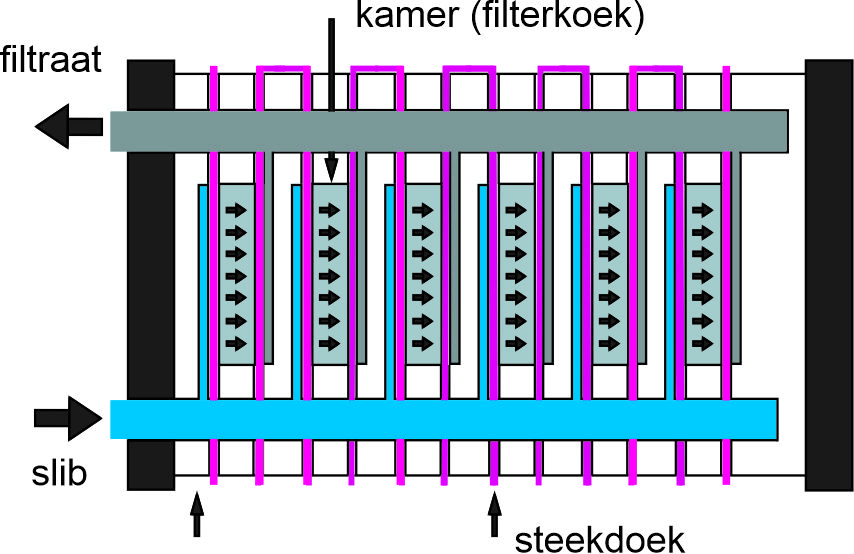 The use of very strong but finely woven cloth materials (with a small mesh opening) results in an optimal filtration or fine separation. It is therefore an obvious process for applications where a maximum purity of the filtrate or the lowest residual moisture content in the solid fraction is required. The starting point in this process can be both the recovery of the solid (filter cake) and the purification of the starting product. The liquid content in the filter cake depends on the physical and chemical properties of the suspension and on the pressure with which the suspension is pumped into the (chamber) filter press.

We always strive for the best possible service for our customers, whereby the continuous operation of the drainage systems at our customers always comes first!

Call us
Scroll to top